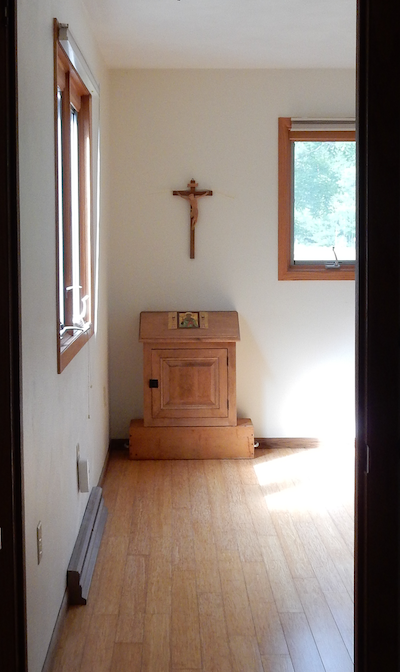 While some with a limited knowledge of Religious Life might view it as an escape from the rigors of real life, the opposite is in fact the truth: the very structures and disciplines that comprise this response to the gospel oblige those who embrace it to face their humanity in all of its fierce immediacy. They must give room to Jesus's declaration that everything that is hidden will be brought out into the light in order to be caught up into God's work of reconciling all things to himself in Christ.

Becoming a nun proceeds by several well-marked stages, much as it does for one who takes up an apprenticeship to a skilled craft, or trains for a professional vocation.

Next, a woman becomes an observer, staying at the monastery for a month or two for an inside view of the life. If she desires to proceed and the community agrees, formal application is made to become a postulant, a learner who is seeking to try out the monastic life in a full and serious way.

After at least six months as a postulant, a woman becomes a novice, a beginner in the monastic life, and at that time is given the monastic habit and a new name as a sign of the new form of life she is taking on in community. The novice stage lasts at least two years. Weekly classes, study, and community support are important parts of initial formation, which includes study of our Constitutions, the vows, monastic and Benedictine studies, and study of Julian’s text.

At the end of the novitiate she may freely request to make a first profession of religious vows as a junior in the community, living under vows for three years. During this period she is entrusted with greater responsibilities while continuing in formation. If there is mutual discernment that a junior should proceed, she may freely request to profess the same religious vows as a senior—solemn vows which last for the rest of a woman’s life until death, with the love and support of the entire community.

The process of monastic formation begins in the postulancy but is a lifelong endeavor, encompassing not only studies with books but the learning of new skills and responsibilities and the ongoing formation of the common life.